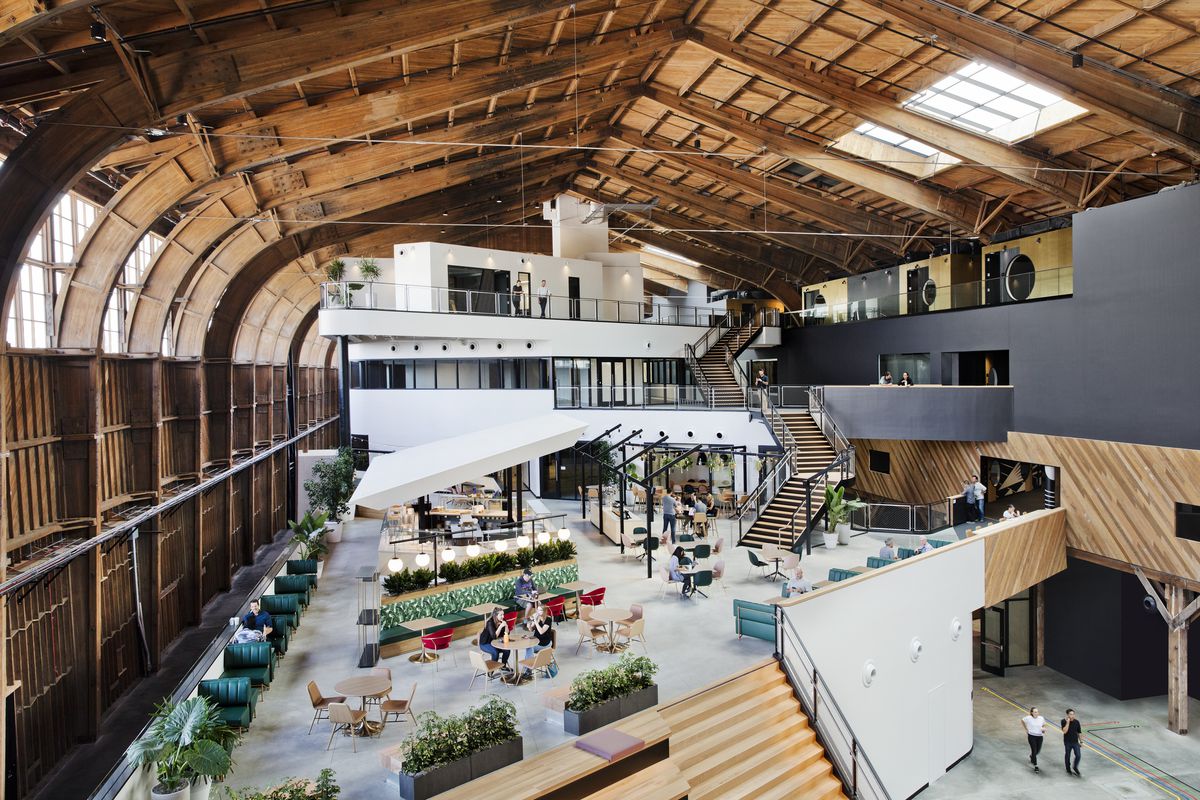 The Spruce Goose hangar is vacant no more.

With the help of ZGF Archictects, Google has turned the old airplane hangar in Playa Vistainto offices by building a four-story structure within the hangar’s wood walls. The effect is that it looks like Google parked a big beautiful cruise ship indoors.

The tech heavy-hitter publicly unveiled the space today with a tour attended by Los Angeles Mayor Eric Garcetti, who called the opening a “moment of incredible transformation.”

In building out the space, adding over 100,000 square feet, Google had a chance “to honor the history of the building and work for what we believe the future of work is going to be—spaces that are moldable and flexible, not tied to your desk,” says Google spokesperson Katherine Will.

The new white structure looks distinctly Streamline Moderne-inspired, like an ocean liner. That connection would be a fitting nod to the building’s background—businessman and aviator Howard Hughes enlisted shipbuilders to create the hangar back in the 1940s.

But the ship-like shape of the new structure was totally coincidental, says Kristi Paulson of ZGF, a principal designer on the project.

“It’s such a long building, moving through it would take you forever, so the idea of the diagonal was to move people more quickly,” she says.

Each layer of the new building is stepped back from the last, allowing for lots of light to flow through the cavernous space as well as facilitating the movement of people through the space.

The original wood skeleton of the building remains, “a wooden cathedral” hovering over the new building, says Paulson. Where the new and old architecture meet throughout the building, the new elements are always set back to allow the older elements to take center stage.

Each piece of existing wood was removed and its location painstakingly documented, so that it could be returned to exactly the same place after it was rehabbed, says Paulson.

Google is using its new offices for Youtube and Google workers, along with a variety of other employees.

“What was important in designing this space was that it did lend itself to a variety of different types of work,” says Will.

With this office, Google has dramatically expanded its footprint in LA.

The company will keep its existing offices in other Playa Vista locations and in Venice’s Binoculars Building, where it rents about 100,000 square feet of space. Google officials emphasized that the construction of this new office was an investment in LA and the company’s future there.